When new crypto enthusiasts learn that there’s a way to earn bitcoin passively through the enigma that is mining, their ears perk up. The idea of using your computer power to solve some “math puzzles” and confirm transactions – and letting it run 24/7, padding your wallet up with bitcoin as you sit back and sip martinis – is enticing.

However, once they find out that mining looks less like a MacBook running with an always-open chrome window day and night, and more like the image above, most quickly learn that it’s out of their reach.

Bitmain, a Beijing-based company, is one of the most popular manufacturers of ASIC mining chips, which power the networks that confirm transactions of Bitcoin, Litecoin, and the likes. Each miner can cost between $300-$2000, and the more miners you have, the stronger your hash power is. That’s why many miners join mining pools — Bitmain included.

Bitmain isn’t only a manufacturer of mining equipment, but also the operator of two enormous bitcoin mining pools: BTC.com and Antpool, which together control almost 40% of the network.

An estimation of hashrate distribution / market share of the most popular bitcoin mining pools as on April 3, 2018. // Image via blockchain.info

It has been estimated by Bernstein Research that Bitmain’s margins lie between 65-75%, with their 2017 profits landing somewhere between $3 and $4 billion. What’s most astounding is that their profits are similar to those of Nvidia, an American chip maker and emerging artificial intelligence company that also manufactures mining equipment, though it took Nvidia 24 years to reach this milestone while Bitmain reached it in as little as 4 years.

Bitmain is a powerhouse in the crypto world — its dominance over the mining industry is both impressive and frightening. Bitcoin was created to be decentralized, but with 40% of the mining network controlled by one entity, it doesn’t seem to be fulfilling that key portion of its mission.

As the dominating producer of mining equipment and the operator of the world’s leading bitcoin mining pools, does bitcoin belong to the public, or to Bitmain? Time will tell… 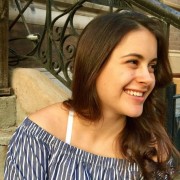 Roni Rose is the founder of Blockchain Bea, a podcast that teaches non-technical people about the basics of crypto and blockchain tech in a fun and casual way, and introduces them to ventures using blockchain tech to make a positive impact.

Ready to jump right in? Get started now with links to some of the most popular exchanges, charting tools, hardware wallets, and VPNs.

Get our latest tips and juicy news straight to your inbox.